Posted on July 26, 2013 by DestinyKuri in Bollywood Buzz, Exclusive | 0 Comments

After holidaying in Spain, Bollywood actors and rumoured lovers Katrina Kaif and Ranbir Kapoor have been spotted again – this time in Sri Lanka. The stars, like many others before them, aren’t talking about their alleged relationship but are giving us all the right hints.

If red is the colour of love then the two were rather colour-cooridnated as they were sighted in red clothes in the island country. Ranbir Kapoor is in Sri Lanka to prepare for his role in Anurag Kashyap’s Bombay Velvet and Katrina Kaif is reportedly accompanying him- at least till work commitments come calling. The shooting of her upcoming film Bang Bang has been delayed due to her co-star Hrithik Roshan’s surgery and that’s why Katrina is spending some quality time with Ranbir.

And while their photographs were clicked at a coffee shop in Sri Lanka, the two also enjoyed a workout session together with Ranbir’s trainer. Not so long ago the duo were clicked in Spain while holidaying in Ibiza and while Ranbir has maintained his single status in the past, these pictures by Stardust magazine tell another story. 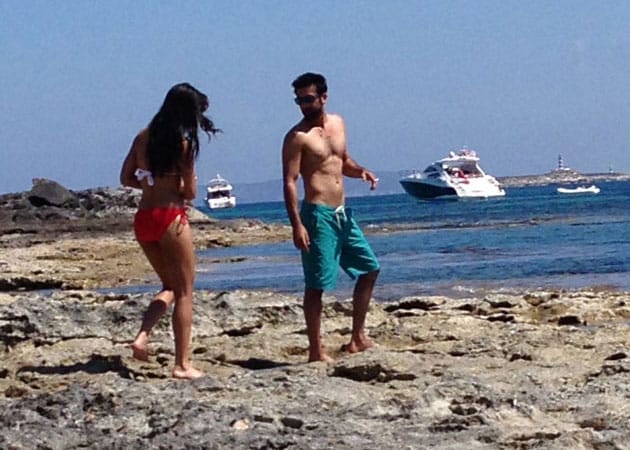 But if you are waiting for an announcement from the two, it looks like there’s a slim chance of that happening. Of the many reasons one could think of, the truth is that they have been involved in very public relationships in the past. Dating a superstar like Salman Khan was never easy. From birthdays to brawls Katrina saw them all. The media circus around it was immense. Ranbir too has gone through the same. He may have scored at the box office with Deepika Padukone in the movie Yeh Jawaani Hai Deewani recently but once upon a time things were bitter.

So while the two are public personalities, they are perhaps looking for a rather private personal life. Since Kat has now bagged another superstar, we think the circus has just begun.