Posted on October 10, 2017 by DestinyKuri in Bollywood Buzz | 0 Comments

Internet could finally exhale at 13:03 hours yesterday as the trailer of Sanjay Leela Bhansali’s much-awaited project Padmavati came to us. While the Shahid Kapoor, Deepika Padukone, Ranveer Singh starrer exudes grandeur from the very first scene of the trailer, it rightly seems like a celebration of Rajput valor and heroism with shades of the delicate love story between Maharawal Ratan Singh and Queen Padmini. A vicious Ranveer Singh as Alauddin Khilji assures the grin on the royal faces while he maintains his wicked smile.

While the hoopla surrounding the movie and it’s historic relevance created quite a buzz, a Rajput body, Shri Rajput Karni Sena, seems to be vying to protect the projection of their Queen. Thanks to Karni Sena’s ‘interest’, the movie was attacked when it was being made.It all began with Bhansali being assaulted on the sets of his period-drama in Jaipur, Rajasthan and the tentacles soon spread to Maharashtra when sets were vandalized in Kolhapur. The crew was manhandled, Bhansali had to add an extra layer of scrutiny and return to Mumbai to complete the shoot, not to forget the extensive damage on the financial and creative scale.

The filmmaker was made to toe the line and succumb to the group’s aggression. Not only did he assure there was no distortion of facts or any kind of chemistry shown between Padmini and Khilji’s character, Karni Sena demanded to be in on the the script and be shown the movie first to then in order the final draft was ‘historically correct’ and protects the interest of their community. Despite handing out confirmations, Karni Sena doesn’t seem to be in any mood to listen. Ever since the posters were released they have issues threats to halt the release of the film.

Soon after the trailer was out and Sena was at it. This time they have gone for the cinema theatres and multiplexes. In what seems like a warning to PVR Cinemas, they have asked them to not release Padmavati and if done so, they’d be responsible for any kind of losses thereafter. 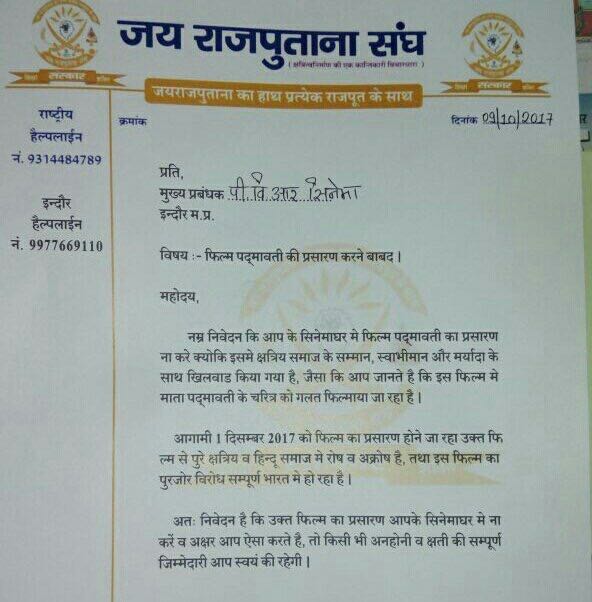 Rajput Karni Sena opines Rani Padmini has been wrongly presented in the film and that the misrepresentation hurts the sentiments of the Kshatriya community. While Bollywood is jumping with joy and has already deemed the film as a blockbusters, looks like Padmavati won’t descend to the screens so easily! Picture abhi baaki hai…