Posted on February 21, 2019 by DestinyKuri in Bollywood Buzz | 0 Comments

In no world is it possible that when celeb couples are talked about, Sonam Kapoor and Anand Ahuja don’t make it to the list. The couple got married in May last year and since then they have been making headlines with their mushy mushy romance.

Sonam shuttles between London and Mumbai and so does Anand to be with his lovely wife. Anand belongs to Delhi and recalls one incident which got him attracted to Sonam in the first place.

Yesterday Delhi-6 completed marked 10 years and Anand shared a post on his social media remembering the same. In the comments section was a comment from Sonam as she wrote,”I cant believe I found my light in you.” And then her hubby Anand Ahuja narrated a story of how he went to see Delhi 6 and saw Sonam for the first time. 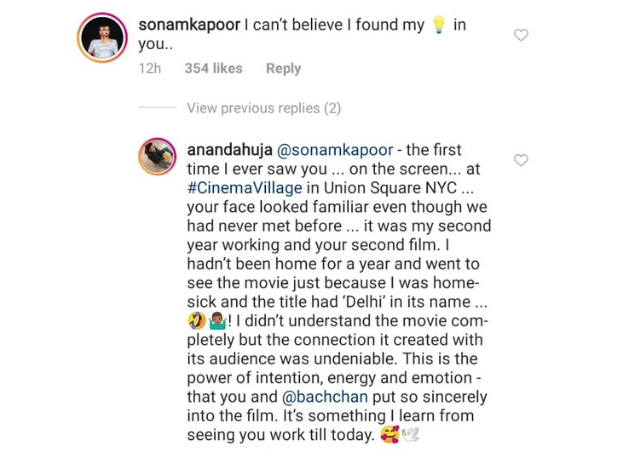 He wrote,””The first time I ever saw you on the screen at #CinemaVillage in Union Square NYC your face looked familiar even though we had never met before it was my second year working and your second film. I hadn’t been home for a year and went to see the movie just because I was homesick and the title had ‘Delhi’ in its name! I didn’t understand the movie completely but the connection it created with its audience was undeniable. This is the power of intention, energy and emotion that you and @bachchan put so sincerely into the film. It’s something I learn from seeing you work till today.”

Isn’t it romantic? Well, Anand and Sonam truly are the epitomes of sweetness.