Posted on September 6, 2019 by DestinyKuri in Bollywood Buzz | 0 Comments

Priyanka Chopra is one of the most popular Bollwood actresses in India and has become a name to reckon with even in the international entertainment industry, post her association with the show, Quantico. However, in a funny turn of things, it seems Google has a different understanding of her name. 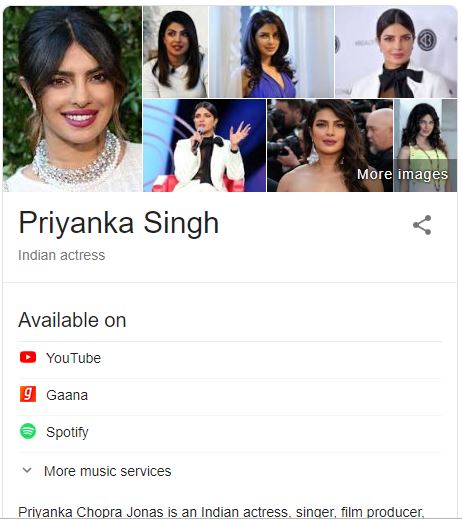 While the reason for the same is currently unknown, it sure caught our eye. For now, it seems like a bug on Google. However, we can’t say that with certainty.

On the work front, Priyanka will be next seen in Bollywood film The Sky is Pink, along with Farhan Akhtar and Zaira Wasim. The film has been directed by Shonali Bose and Priyanka will be playing the role of Zaira’s mother in the film.

The film will be premiered at the ongoing Toronto Festival on September 13. Priyanka is expected to attend the event with the rest of the cast. In theatres, the film will release on October 11. The Sky is Pink is Priyanka’s first Bollywood film in three years. The last was 2016’s Jai Gangaajal.

Priyanka was supposed to star opposite Salman Khan in Bharat, which released in June this year, but the actress pulled out of the project due to her wedding. Katrina Kaif had filled in her shoes after her exit.