Posted on December 5, 2019 by DestinyKuri in Bollywood Buzz | 0 Comments

Shah Rukh Khan and Kajol‘s on-screen romance is one of the best things to have happened to Hindi cinema. Nobody will disagree to this. It is so real it often transcended the screens, and fans wished they were a couple in reality as well!

So, Kajol recently held an ‘Ask Me Anything’ session on Instagram, and was literally bombarded with questions. One fan asked her whether she would marry SRK if she had not met Ajay. Kajol’s reply was hilarious. ‘Isn’t the man supposed to be proposing,’ she asked back. 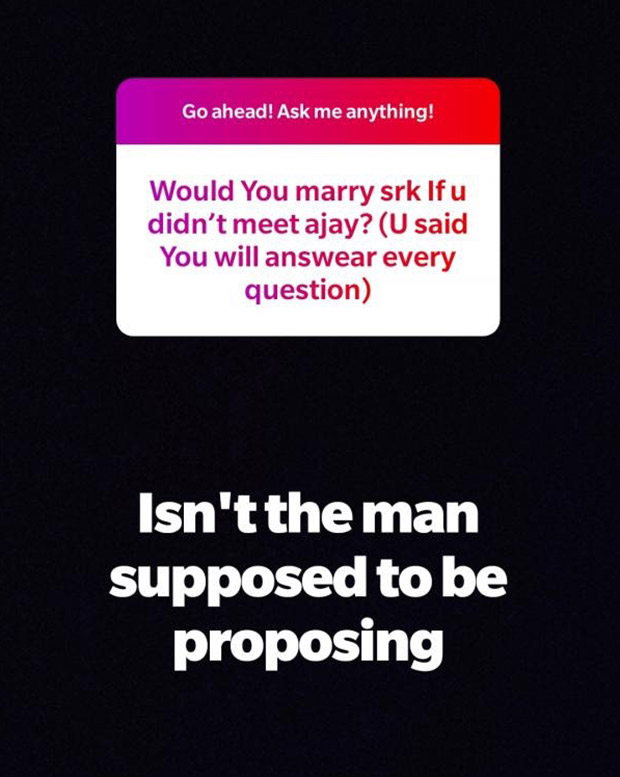 Another fan also wanted to know which would be her next film with the superstar. ‘Ask SRK’, answered Kajol. How would she describe her bond with him? ‘Friends for life’, was her answer.

Kajol and Shah Rukh Khan’s journey began with Baazigar in 1993. They were last seen together in Rohit Shetty‘s 2015 release Dilwale. While new entrants are making their presence felt in Bollywood so frequently and we have so many on-screen pairs to choose from, SRK-Kajol, with their iconic romance, stand special even today!

SRK, after his last release Zero, is yet to announce his new project. Kajol, on the other hand, will be next seen in Ajay Devgn‘s Tanhaji: The Unsung Warrior.